Giving Back To The Community

Dr. Weisbard’s Philosophy of Giving Back

Kara Burns was released from federal prison in 2014, a lost and broken woman. Today, she is strong and determined to help change the world. Thanks to her courageous spirit, her story of transformation from a methamphetamine addict and a felon who served 2.5 years in Federal Prison has helped transform many people with her narratives about spirit and personal motivation.

As a rebellious teenager, with all avenues blocked, Kara turned to drugs. As Kara’s battle with alcohol and meth addiction escalated, the effects of drug abuse manifested themselves not only inside her body but outside as well. Her teeth began rotting out of her mouth. Her life eventually spiraled out of complete control. She was homeless and now seriously addicted and shooting meth. As she headed further into the abyss of her addiction, she tried to quit many times but was unsuccessful. Eventually, she was indicted on a federal conspiracy charge to distribute methamphetamine. She was subsequently released back into society clean and drug-free, but as a newly released felon, she faced a new set of challenges.

Kara eventually went to a Dress for Success event in Denver, where she was given her first real clothes in 2.5 years. Her chance meeting with Dr. Weisbard proved the transformative power of a smile. Dr. Weisbard provided the much-needed dental work to give Kara the confidence to step into the leadership role that was her calling. Kara gained the courage to believe in her strength and is now employed at Work Options for Women, a non-profit that helps people overcome barriers to sustainable employment. Since 1997 they have helped to train and employ over 3,000 individuals in the Denver metro area.

It was at a Dress for Success breakfast meeting that Dr. Lee Weisbard heard Kara speak about her personal struggles and decided that she could help Kara regain her confidence by redoing all of her teeth free of charge. This physical transformation helped Kara triumph in her journey towards healing and led her towards helping others. She is now a spokesperson for Dress for Success. After having gone through such a harrowing experience Kara is giving back to women. She has become a beacon of hope and inspiration for anyone who feels like success is unattainable. Today Kara is all about helping others move forward and her story gives others hope that they can start to make good decisions and take charge of their own lives.

We believe in the transformative power of a healthy smile.

The Dress for Success mission is to empower women to achieve economic independence by providing them with a network of support, professional clothing, and development tools to help them thrive in work and in life. They believe that every woman has the right to realize her full potential, and that achieving gender equality is imperative to developing a sustainable and just world for everyone. Learn more about the Denver chapter of Dress for Success here.

Dental Lifeline is a 501(c)(3) nonprofit organization, founded in 1947, that nationally provides access to dental care and education for people that cannot afford it. Their mission is to improve the oral health of people with disabilities or who are elderly or medically fragile. 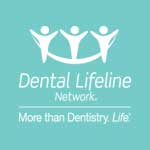 Would you like to request an appointment with Dr. Weisbard? Use the form here to send us an email. Leave your phone number and the best time to reach you and someone from the office will be back in touch with you shortly. We're looking forward to seeing you!

We're conveniently located in the heart of Greenwood Village.